If you haven’t read part one of this article, you can find it here.

Oman didn’t even have a soccer federation until 2005, but despite having an old squad with mainly domestic players, they should be practically guaranteed to advance to round three of World Cup qualifiers due to their lead over third-placed Afghanistan. The Reds have never qualified for a World Cup and only made it to the Round-of-16 in the 2019 Asia Cup, the farthest they had ever been in the tournament. However, Oman are currently second in the group, just one point behind Qatar.

Qatar have already qualified for this World Cup since they are the host nation. Still, they are dominating the group, undefeated and in first place. They did struggle to a 0-0 against fourth-placed India, who statistically cannot win the group, but have undoubtedly looked like the best team in this group. Qatar are going to hope for a successful World Cup, as they look to follow up on the 2019 Asian Cup, which Qatar won.

Afghanistan could surprise some people as they already have several teenagers playing top-flight soccer in Europe. Unfortunately, the Lions Of Khorasan can not win the group and are eight points behind second-place Oman, so advancing to the third round looks unlikely.

Bangladesh and India also can only finish as runner-ups, but a young Bangladesh team has struggled to one point. Meanwhile, India likely won’t advance after drawing three of their five games and losing the other two they have played so far to Oman. This is likely India legend Sunil Chhetri’s last chance to appear at a World Cup, as Chhetri turns 36 in August.

Japan have proven to be a powerhouse in Asia, qualifying for every World Cup since 1998. However, the team has changed much over the past few seasons as veterans like Keisuke Honda, Shinji Kagawa, Eiji Kawashima, Shinji Okazaki, and Yuto Nagatomo have become less involved. Still, Japan have won every game they have played and have a game in hand over all other teams in the group. Japan, barring a tremendous let down, will advance to round three.

Kyrgyzstan are tied with Tajikistan for second place, but the White Falcons have a far favorable goal differential, as they have +5 and Tajikistan have -2. This is mainly because Kyrgyzstan beat Myanmar, 7-0, but they also lost to Tajikistan, so second place is up for grabs.

Tajikistan have had questionable form and might benefit from the break in play. They’ve lost three of their last four matches, against Malaysia, Japan and Myanmar and tied with Kyrgyzstan. Tajikistan have only scored more than one goal in one match, which they lost 4-3 to Myanmar. If Tajikistan were to advance to the third round of qualifiers, it wouldn’t be because of exciting, high scoring matches.

Myanmar, formerly known as Burma, have qualified for just one Asian Cup and zero World Cups, but are just one point behind second place. They have done surprisingly well, bouncing back to win two straight after losing their first three games including the previously mentioned 7-0 loss. Myanmar might have a chance to qualify for the third round.

Mongolia’s national team was inactive for thirty years, and have never qualified for any major international tournament. So how did Mongolia beat Brunei to advance to the second round, and how are they just four points behind second place? Mongolia have played very defensive soccer, conceding just ten goals with only two scored. It’s not impossible for Mongolia to advance to the third round, but it’s unlikely.

Vietnam haven’t exactly used attacking tactics either. Vietnam have scored just five goals in five games, but are undefeated and top of the group. No team that is top of their group has scored fewer than Vietnam – and that includes Japan and Australia, who have only played four games each. Vietnam have scored goals when they need them, as demonstrated in a 3-1 victory over Indonesia.

Malaysia are ranked 154th in the world, but have stunningly won their last three games, two of which were qualifiers. The Malayan Tigers were drawn in a group with two of their most hated rivals, Indonesia and Thailand, and have won all three games they have played against them. The second match against Thailand will likely be played without fans, but it will still be an incredibly important match for both sides.

Thailand are just a point behind their second-placed rivals. The War Elephants’ match against Malaysia will be on the final matchday of the second round of qualifiers in November, so that could very well decide who advances to the third round of qualifiers. Neither of these teams have played in a World Cup, and with so much at stake between rivals, this will be a can’t miss. Thailand will be depending on 22-year old Sporting Lisbon-linked superstar Supachok Sarachat, who scored two goals and gathered an assist in Thailand’s 3-0 win over Indonesia. The attacking midfielder has scored four goals in four games in the Thai League this season, and could help Thailand go far.

The United Arab Emirates are in fourth place, three points behind second-placed Malaysia. The UAE also have a game in hand, as well as another advantage. Omar Abdulrahman, one of Asia’s most underrated players, is back after a lengthy injury break that lowered his market value severely. Abdulrahman went on trial with Manchester City in 2012 after the Citizens’ won the Premier League for the first time, but could not sign with City because of work permit issues, since the UAE was ranked too low for Abdulrahman to get a permit. If UAE can advance to the third round, that won’t be a problem in the future.

Indonesia have zero points after five games, and are officially eliminated. The only thing Indonesia can still do is try to upset and frustrate rivals Vietnam, and hope their rivals don’t advance to the third round.

Turkmenistan are the surprise leaders of this group. The former Soviet Nation were eliminated in the group stages of the 2019 Asian Cup, losing every match in a group that consisted of Oman, Uzbekistan and Japan. Still, Turkmenistan are top of the group, beating Sri Lanka twice and North Korea. However, the lead might not last.

South Korea are just a point behind Turkmenistan and have played one fewer match than the Emeralds. South Korea have a World Cup streak even longer than Japan’s, as South Korea have qualified for every World Cup since 1986. They even finished fourth in 2002 when South Korea joint-hosted the tournament with Japan. That tournament was overshadowed by controversial refereeing, which was said to benefit the South Koreans. The Tigers of Asia have a talented squad, with the likes of Valencia youngster Kang-in Lee, new RB Leipzig purchase Hee-chan Hwang, and Tottenham star Heung-min Son.

Lebanon are tied with South Korea on points, but South Korea has superior goal differential. It would be a first-ever World Cup for Lebanon, and the Cedars have a decent chance at advancing to the third round, despite being in third place. Just a point behind first and forcing South Korea and North Korea to ties, with striker Hilal El-Helwe scoring consistently, the Cedars have potential to advance.

North Korea has already played South Korea in an empty stadium. This had nothing to do with coronavirus – the match took place in October. South Korea is technically still at war with North Korea, and tensions were high in the match, but it finished in a 0-0 draw. The North Koreans are also tied at eight points, but with a goal differential of just +1. The Koreans do have a promising 21-year old in Kwang-song Han who plays for Qatari club Al-Duhail after leaving Italian champions Juventus in January. You won’t hear Han in any interviews, however. North Korean dictator Kim Jong-un has banned Han from any interviews.

Sri Lanka are already eliminated. They have lost all five games, scored zero goals and allowed sixteen. This isn’t too surprising, considering Macau beat Sri Lanka 1-0 in the first leg of the first round. Sri Lanka only advanced because Macau were forced to forfeit the second leg over fears that there would be a repeat of the suicide bombings in Sri Lanka, giving Sri Lanka a 3-0 win. 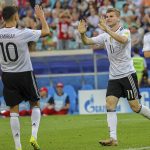 Back for More: Germany First to Qualify for World Cup 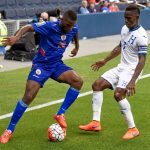