The Ballon D’Or is perhaps the most prestigious individual award in the game of soccer. It’s the award for best player in the world in all competitions, and has been won six times by Lionel Messi, five times by Cristiano Ronaldo and other famous players have also won the award, which is given out yearly. Well, not this year.

The award will not be given due to a “lack of sufficient fair conditions”, (AKA coronavirus) which is absurd. All leagues resumed with the exception of the French Ligue 1, and with all due respect no French players were really competing for the award this year. They might as well have taken away Liverpool, Bayern Munich and Real Madrid’s league titles, because other teams could’ve argued that there was a “lack of sufficient fair conditions”. Obviously that’s a poor argument, and the awards should have at least been given virtually.

So instead, we will do a fan vote for the first ever The Soccer Goal Ballon D’Or Awards! Vote in the poll below, and I’ll go into an analysis tomorrow of who ended up winning the poll. 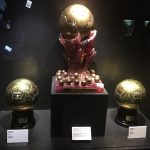