When Benfica faced Famalicão towards the end of the Primeira Liga season, many expected an easy win for the Lisbon-based side. Benfica was on a roll—they had just defeated rivals Sporting Lisbon and tied Liverpool, and only had one league loss since February. Attackers Darwin Nunez and Goncalo Ramos were both taking the league by storm, with Nunez recently moving to Liverpool.

However, on this outing, both Nunez and Ramos were silenced. Benfica failed to find the net at all, despite having thrashed Famalicão 4-1 earlier in the season. Instead, they were held to a 0-0 draw, something only Barcelona, PSV, and Dynamo Kyiv managed to do to them this season. The reason? Alexandre Penetra.

Against his former club, Penetra came up big with four interceptions, two blocks, a tackle, eight clearances, and 89% pass accuracy, proving helpful in attack as well as defense. This is the kind of performance that the 20-year-old displays frequently—and whoever signs him might have one of the bargains of the season.

Penetra is a product of Benfica’s famous youth academy, having joined the club in 2013. While in Lisbon, Penetra appeared for Portugal’s U16 and U18 teams, but never managed a first-team appearance for Benfica. He stayed with them until 2020 when his contract expired and he opted to join Famalicão. It was a risky move: Famalicão had only recently been promoted to Portugal’s top flight and Penetra would start on their reserve team. It’s a move that has paid off completely, however.

His debut came this year in the second game of the Primeira Liga season against one of Portugal’s ‘Big Three’ clubs, FC Porto. (Side Note: You can read about a former Porto player, Fabio Silva, here). It wasn’t his best performance, with Famalicão losing 2-1, but Penetra solidified his role in the team.

Swapping coaches midseason didn’t change anything for Penetra: Famalicão picked up steam and easily avoided relegation. The talented defender continued to play a crucial role, even being named captain in several matches. Famalicão lost all four league matches that Penetra didn’t play in this season.

Penetra’s strong season saw him finish with the most interceptions in the league (67), ahead of veterans like Nicolás Otamendi and Sebastián Coates. Penetra also averaged almost six accurate long balls per match, slightly better than Otamendi and former Real Madrid defender Pepe. Penetra isn’t one of the league’s leaders in tackles, but this could be partially due to Famalicão playing a three-man defense with two other center-backs.

Seeing as he might move to Fenerbahçe, it makes sense to compare Penetra to Fenerbahçe defender Kim Min-Jae, who is reportedly leaving.

Penetra is five years younger than Min-Jae and trails him slightly in most major categories. He has a better tackle percentage (69% to 68%) but has won three fewer tackles. Penetra also has two fewer interceptions and trails significantly in clearances and pass accuracy. However, they also play in different leagues—for the time being, anyhow—and Penetra played one fewer match.

At 6’2, Penetra is strong in the air and relatively quick for his size. He contributes on offense and defense, is an all-around defender, and is only 20. He also has faced big clubs, having faced the likes of Porto, Benfica, and Sporting Lisbon.

However, it’s also only his first full season, meaning that he doesn’t have too much in the way of experience. Additionally, he received several yellow cards and one red this season, something that teams often consider when evaluating a player. Unless, of course, that team is Atletico Madrid.

If there is any truth to the Fenerbahçe rumors, it presents a unique opportunity for Penetra. Fenerbahçe is a strong side that has worked wonders in developing young players recently while staying competitive. They finished second in Turkey this season and have a shot at Champions League qualification, which would result in Penetra getting exposure to some of the best teams in the world. Add in the fact that Fenerbahçe has a Portuguese manager, and that’s a recipe for success.

Overall, Penetra is a talented defender who is only going to improve with a stronger team. Famalicão are by no means terrible, but they have had their struggles, including an eight-game winless start to the season. With a better supporting cast, Penetra could become an elite defender, wherever he plays. 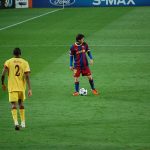 Five Best U21 Players Who Will Be Free Agents This Summer