The EFL Championship Playoff Final is finally here. Brentford came back from losing the first leg to beat Swansea 3-2 on aggregate to advance to the final of the playoff. The final will be an all-London affair, as Fulham survived a scare, beating Cardiff City 3-2. So who has the advantage when it comes to the final, and who will be promoted to the Premier League?

Brentford have never been in the Premier League, and were in the fourth tier of England as recently as 2009. They started this season off poorly and didn’t even climb into a playoff spot until matchday 22, when they beat Fulham. Danish manager Thomas Frank then led Brentford on an eight-game winning streak, but Brentford missed out on automatic promotion spot after losing their final two matches. The Bees lost the first leg of the semifinals, 1-0, to Swansea, but dominated the second leg 3-1.

Brentford might have a slight advantage over Fulham. In the two previous matches they played each other, Brentford won 1-0 and 2-0, with the latter being part of the eight-game win streak. Brentford also have significantly more at stake, as star winger Saïd Benrahma expected to leave if Brentford don’t get promoted.

Statistically, Brentford also have the advantage. Whilst they finished level on points with Fulham, Brentford have scored 16 more goals and allowed 10 fewer goals than the Cottagers. Brentford have also won over half the games they’ve played against Fulham in the “West London Derby”.

However, history will be on Fulham’s side. The Cottagers have been in the Premier League fifteen times, which is fifteen more times than Brentford. Fulham were in the Premier League last season, but that ended in disaster. Poor spending resulted in Fulham finishing second to last, and being relegated.

Fortunately for Fulham, striker Aleksander Mitrovic has recovered from an injury that led to him missing both legs of the semifinal against Cardiff City. Mitrovic, the Championship’s top scorer, has scored 26 goals and is essential if Fulham want to be promoted.

Fulham will have to recover from a poor second leg against Cardiff, in which they struggled and lost 2-1. If Fulham are to win, they’ll need to be on top of their game. With Mitrovic back, that’s more than likely.

Brentford will storm to an early lead thanks to Ollie Watkins, but goals from Tom Cairney and Mitrovic mean that Fulham win, 2-1. The Cottagers ruin Brentford’s underdog story and return to the Premier League.

Who do you think will win the playoff final?

Image Courtesy of Nick from Bristol, UK / CC BY. 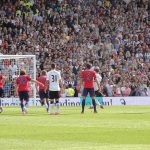 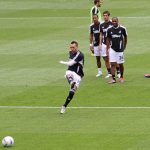